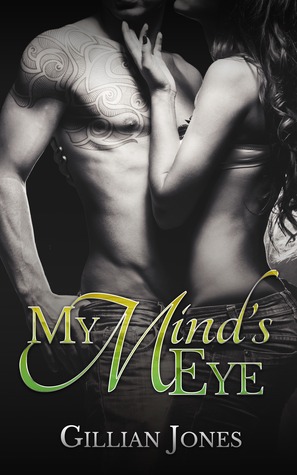 My Mind's Eye by Jillian Jones

Nothing promises a great story and a drool worthy alpha male than having him introduced through his soon to be trademark of a fucking GROWL!! I mean, what does a girl really need to do to elicit that type of sexy first impression?!

In this fast paced + addictive read, we sort of get two polar opposite people that evolve throughout the story at the same time that a unique story teller turns mere words into heartfelt, sexy and raw emotions...

Kat is a College student who is trying to steer clear of having her past accidents cloud her current state of mind. It's hard to accomplish but it's also so sad to imagine what it would have been like to be a survivor of a horrible fire accident! Saying that, this type of a prologue was the perfect way to grip my mind into the story. It's as if something clicked and I knew MY MIND'S EYE would be anything but a simply read. No. It was as ever consuming as it was breathtakingly well written.

That prologue definitely showcased the strong, long lasting and rare friendship between the two girls. Her best friend Claire is basically the type of best friend that not many girls have or would be lucky to keep if they did. I loved that Gillian Jonescaptured Claire's characteristic and overall purpose in the story as more than just the fun, party going and advice ridden best friend we tend to find in so many romance based books. I mean, what kinda person wouldn't want to have a friend that says things like:


"Go, my friend. I give you permission to embrace your inner whore with that sex-on-a-cream pie of a man"

In this story, her best friend should be called her sister from the amazing way she was able to not only save Kat's life during the fire but also in the sisterly bond for how she was always there to look after her in Kat's moments of panic. Even in need of hot boy talk or sex life, to small things that all best friends talk about, Claire was the basic example of a perfectly created best friend.

For the juicy part that may or may not involve the ever drool worthy, panty dropping & sexy smirking creature...

Even the name can make you feel anything but sane..

For the love of all male species out there? Take a note from thisfictional characters book and listen up:

Every. Girl. Wants. Her. Version. Of. Ryker.

No arguments nor any sort of valid excuses.


Half the time I can't find words when I'm with her, 'cause these feelings make me fucking nervous. Nervous 'cause she actually makes me happy!


Jesus, baby, you're my mind's eye. God, lately all I see is you. I dream of you when you sleep. I wake of thoughts of you. Then I see you and, fuck, if you're not all I need to see."

If I start writing about all the ways this creature has put a new meaning to the word sexy, that list would be never-ending. So I'll just at least try to keep to the main points.. I did say try so. Yup. Here we go.

Have you ever met or even glimpsed at a guy who was too hot to even consider if he was real? Or a guy that had the most beautiful eyes that you literally become part of your own mental fictional story and stare at his eyes for an awkwardly long & embarrassing hour? Or even so much as seen the rare sexy grins that guys truly portray when they see something they love?

Well. This was only the beginning of what comes to mind when reading about Ryker.

I know this sounds weird, but falling for a fictional character can be so easy when written as if you're actually part of the story rather than just sitting there and flipping through the pages.. This alpha male was no exception!

Hot (yes. I really did need to use two words to describe his face.. so don't even get me started on his lick-able body. Jesus... I guess I'll just *sigh* and move on 'cause I am not even going to apologise for going heart eyes over this guy.. )


Seeing her vulnerable like this sheds the last of my resolve to try and keep my distance from her. There is a depth to her that I want to explore and support. I want Kat Rollins to be mine. I want her to be my ENDGAME, my Holy Grail

All round bad ass with a capital B

All round perfection on looks and brains!!

Ryker is the type of character that you wouldn't really expect to be created to both be a sex on legs symbol in every way, but to also have an sweeter side to him that only the girl of his would witness. No. He is far more than that.

With the background of being heartbroken by a woman who I have no idea in which universe she would even contemplate cheating on such a guy, and a mind of someone who gives every ounce of his heartbeat to the girl he loves.

Aside from the constantly evolving relationship to the steamy sex scenes that even made me blush despite having read and still reading New Adult books that would only even wish but truly, never ask for forgiveness in what they entail.. This story has a twist to it that I didn't really expect.

I though it would be a typical romance story with the boy and girl hating each other but eventually ending up together - which is an amazing book to read if written well.

In Gillian Jone's My Mind's Eye we get so much more. I won't spoil anything or any more, but I'll just say, be prepared for the ex boyfriend that has "breaking up" issues as an understatement..

One aspect that I didn't particular like or that wasn't really to my taste, was the dialogue between the characters could quiet often be lengthy? Despite the dialogue being interesting and adding to the story, at times it seemed like each individual person was saying too much at one single time. In my personal opinion, it could have been sized down to just one or a couple of sentences. BUT again, that wasn't so bad since it did add to the development of the story so I did over look it most of the time.

Sometimes, there was also too much information at situations that I wouldn't expect there to be or that I would have wanted it to.. One particular was when the girls had a night out in town and as they were walking to the dance floor, Kat suddenly starts talking about her brother and his own life. It didn't take away from the overall story but it just felt a little odd? It just made me blink away from the story for a few seconds..

That was basically the only potential negative aspect I could mention. That's all. Everything else was written with such talent and addictive development that I wish I could read the story again or at least meet Ryker for the first time again haha I know is sounds silly but what can a girl do when such a fictional world is created?!

I could have read this book in one sitting was it not for you know, work, writing, food, socialising and all those not so interesting parts of a readers world..

The epilogue was one of the sweetest and funniest but sexiest moments that fit the story perfectly! This was a New Adult Romance with many typical ideas that you would find in this type of genre, but the writing style, characters (Ryker - double sigh), story development, personalities and the overall concept of how the plot twist turned out towards the end - definitely set this book apart

Thank you Gillian Jones for providing the opportunity to read your breathtaking book!! I can only ever look forward to reading more creations that can come any distance closer to Ryker's unfair perfection.. I am so ruined for my expectations in men. Yup. Ruined. But not complaining at all ;)

Posted by heartbeats between words at 20:28