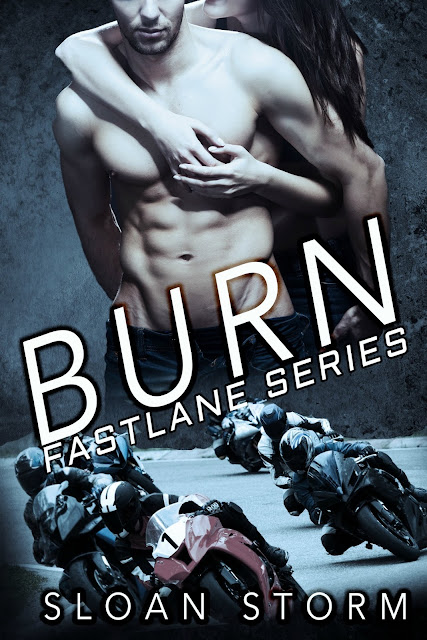 Chance Vix -- what kind of maniac rips down a straightaway at more than two hundred miles an hour on a motorcycle which, oh by the way, costs more than a mansion?

What kind of brute crushes all challengers, decimates rivals and has owned the crown of one of the world's most deadly sports for years? What kind of stud leaves women everywhere desperate for his attention, willing to do almost anything to try and tame him?

I'll tell you what kind. The most mouth-watering, heart-stopping, daredevil of a head-to-toe hunk I'd ever laid eyes on in my life - that's what kind.

And me? Well, let's just say good girls from Indiana don't wind up with guys like Chance Vix. Ever. No. Nope, never happens.

Unlike Chance, I'd taken the slowlane through life, playing it safe the entire time. And what had it gotten me? An end to a five-year relationship with my accountant boyfriend slash wanna-be rocker who spent more time playing gigs than sleeping with me.

When an unplanned trip to an exotic locale, far removed from midwest gloom, brought Chance and me together, I had no idea how much my life would change.

Could I hold on? Was I crazy to even try? 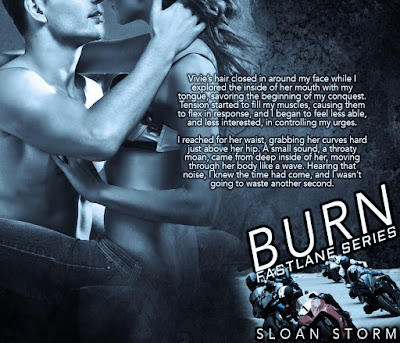 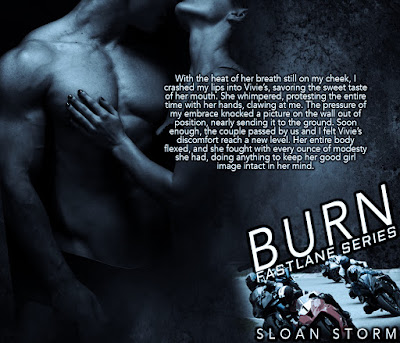 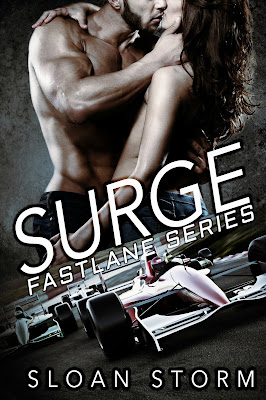 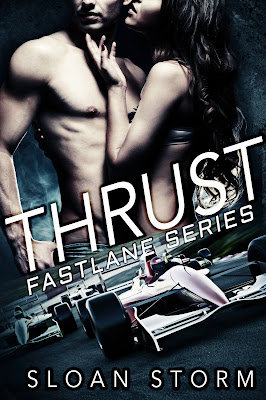 Sloan Storm is a verbally difficult, yet physically generous, writer who pens imaginative yarns based on dominant men and the women who challenge them.

As such, power plays and passion are the heart of each and every story. The writer's creative tendencies may drift as the mood strikes, but the essence of all tales told wind up back at the same place... the polarizing difference between the sexes.

After all, what else is there in life?

When not glued to a keyboard creating tales of whimsy, Sloan loves to talk to fans! If you want to connect, you can do it in any number of ways: 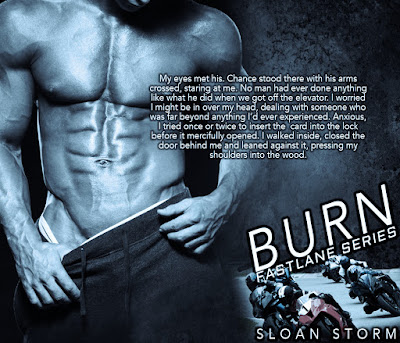 Posted by heartbeats between words at 03:13 No comments: In the small town of Bailey, country music, motorcycles, and reckless teenagers are the norm. Fallon Davis and Wesley Jones are no exception. That is, until Wesley disappears from Fallon's life when she needs him the most.

After losing everything important in her life, Fallon replaces her love for Wesley with hatred. Fifteen years later, Fallon has quit waiting on Wesley. She is ready to focus on her life, career, and friends at Backwoods until the unthinkable happens. Wesley rides back into town, and he quickly realizes Fallon wants nothing to do with him, but will he take no for an answer?

Will Wesley be able to win over Fallon, or will the memories of their past be too much for their future to handle? “What can I get y’all boys?” I ask sweetly, still avoiding his eyes.
“We’ll take a round of SoCo for starters,” the chunky one states with a wink.
“FiveSoCos, comin’ right up,” I say as I go to grab the shot glasses. Then I hear his raspy voice, and my body betrays me. Stop it! Don’t do that! Everything within my body comes alive with the sound of his voice.
“That’s four shots and a Coke,” Wesley states. I turn on my heels quickly.
“Coke? Are you sure?” I question, and he nods in agreement. “You want it in a shot glass, too?” I ask like the smart ass I’ve become over the years.
With a husky laugh, he answers, “Whatever you want to do, Pumpkin.” I stiffen at the name, but don’t turn around. I haven’t been called that since the day he rode away. After gathering myself together, I pour him a shot of Coke into a glass. He smiles when I place it in front of him.
“Come on, Pumpkin. Pour yourself one. I think me rollin’ back into town calls for a toast.” I roll my eyes, and then Paige hands me a shot glass of Coke. Raising my glass, I put one hand on my hip and wait for his toast. “Here’s to us, Pumpkin. Past, present, and future.” I clink my glass and when it touches my lips, I quickly realize it’s not Coke, but rather sweet cinnamon that burns the entire way down. I’m thankful to have Paige to count on when I need it most. Slamming down my shot glass when I finish, I turn and walk out of the bar and into the back room, holding myself together until I’m alone. Dixie Rae is a small town girl living her dream as an author.  When she’s not writing, she indulges in guacamole, listening to Brantley Gilbert, and drinking a cold one.
Email| Goodreads Posted by heartbeats between words at 03:05 No comments:

Stygian by Nashoda Rose is FREE!!! 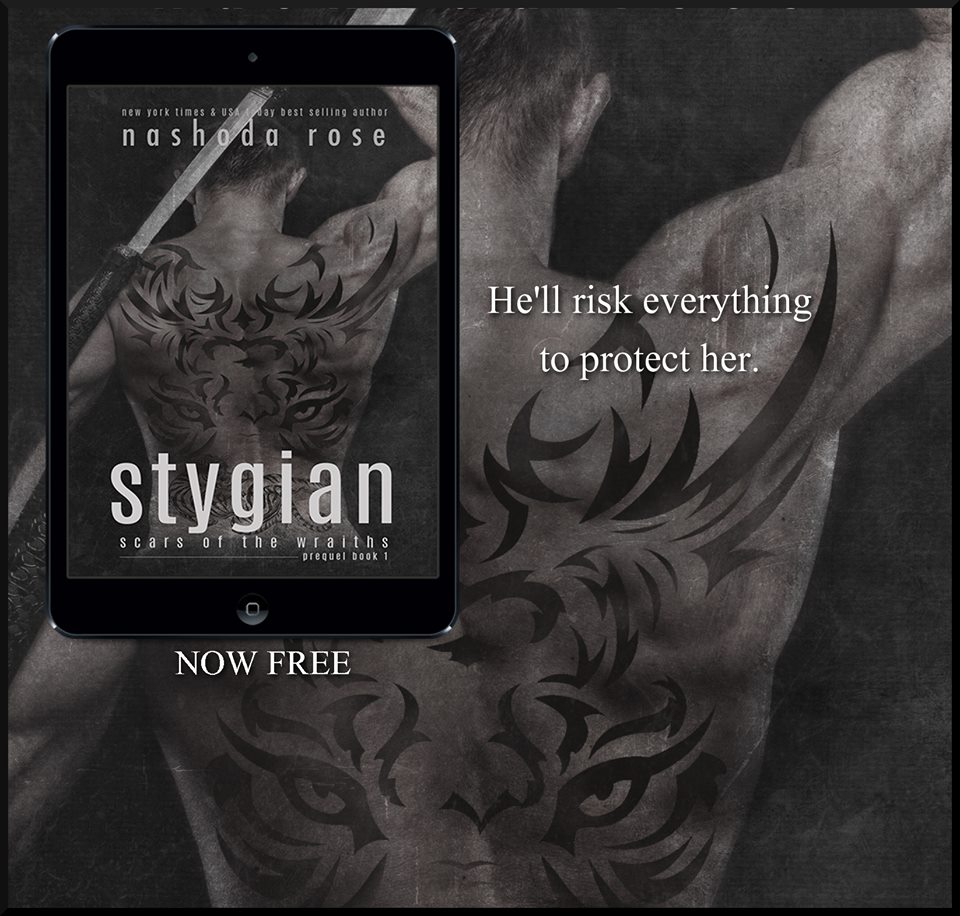 The Scars want me imprisoned. The Wraiths want me dead.
But the woman I can’t forget needs me. And I’ll risk everything to protect her.
Even if it means killing her.
Because in order for her to live—first she must die.
STYGIAN IS NOW FREE ON ALL RETAILERS
Amazon US
Amazon UK
iBooks
Nook
Kobo
Google Play 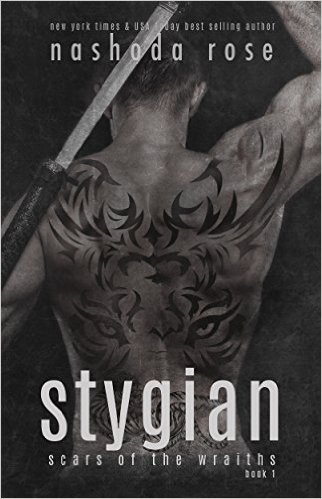 
Danielle
I remember nothing of my abduction two years ago. Sounds and scents trigger horrific flashes, but it’s all a blur except for one man with brilliant green eyes. When the tatted six foot two Adonis shows up at my door, my knowledge of the world is shattered.
Bound to the immortal Scar by an ancient spell, we are on the run. Because Balen is the hunted.
And if he dies, so do I.


Balen
My code of honor was respected without question … until I consumed the blood of a vampire in exchange for a mortal woman’s freedom.
The Scars want me imprisoned. The Wraiths want me dead.
But the woman I can’t forget needs me. And I’ll risk everything to protect her.
Even if it means killing her.


Because in order for her to live—first she must die. 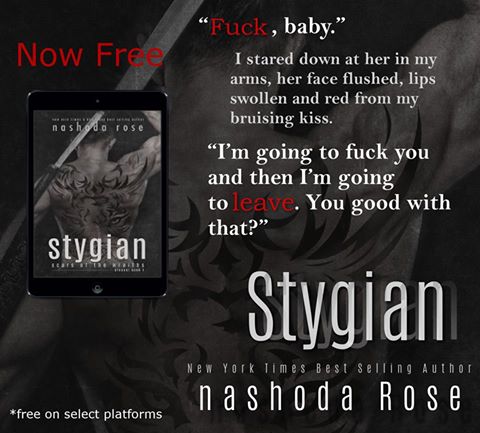 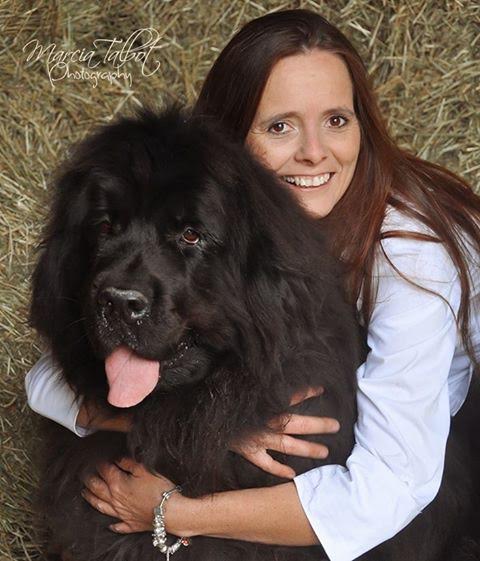 Nashoda Rose is a New York Times and USA Today bestselling author who lives in Toronto with her assortment of pets. She writes contemporary romance with a splash of darkness, or maybe it’s a tidal wave.


When she isn't writing, she can be found sitting in a field reading with her dogs at her side while her horses graze nearby. She loves interacting with her readers and chatting about her addiction—books.

Posted by heartbeats between words at 02:42 No comments:

Torture
Rose has a job.To protect her nephew, Charlie. A hot motorcycle thug isn't enough of a reason to get in the way of that.
Except the one who saves her from a torture so vile, she doesn't know who she is anymore.
Drake is determined to take Charlie from her, and he'll play dirty to do it.
Noose is justas determined to protect her from the Road Kill's number one rival MC.
Can he do it when she denies his protection?
Rose will not end up like her sister Anna.
Dead.
Rose soon discovers there are worse things than death.
Circumstance
Noose's life has been turned upside down.
Rose Christo is more than she seems, and involved in way more than she should be.
When a certain Chaos Rider kidnaps her as a means of coercion, Noose finds he's willing to tie a knot especially for Diablo, aka Drake.
Not to kill--to warn.
But Noose wasn't put on this blue marble to warn men who threaten his property.
Even if the woman that's his property, doesn't know it.
***NOTE: Please be aware that KNOT is part two of three, and ends in an HEA with ROSE, coming March 2016.

Posted by heartbeats between words at 02:35 No comments:

Just another one night stand…
Ryann despised the thought, but it was the only one she could draw when she woke up in an empty bed. Tired of being let down by everyone she cared about--aside from her brother--Ryann begins taking her life back, pushing back at all the bad and ugly life tosses at her.
Ryder knew the moment he left Ryann alone in bed he’d made a mistake. Running and hiding from his family for years, Ryder didn't want to pull her into that life. She deserved more than constantly moving from place to place.
Ryann just can’t push again. Life is winning and she just wants to lay down and give up. Now, she must make a decision: to run from the truth, or step up and admit what she’s known all along. And Ryder... nine months later and he can’t get Ryann out of his head. He wants her more than he wants to run.
But there's a terrible truth he has to face: it might be too late for Ryann to give Ryder his second chance.

Rebecca lives near the shore towns of New Jersey, with her husband and two kids. When she's not writing she loves reading and watching SOA and TrueBlood.
Website * Facebook * Twitter
Hosted By:

Posted by heartbeats between words at 02:33 No comments:

Meet Colton Wade, FMX rider...
I’m just a small town guy who caught a lucky break. Now I’m living the dream, on the brink of high-flying super-stardom. But something’s missing.
That something is Taylor.
She’s my best friend. The one who makes me want to push harder and higher. The one I fall back on when shit gets tough. The one I’d give it all up for.
I’d do anything to protect her. To make her dreams come true too.
But a single night changes everything.
And now the one she needs protection from...is me.

Posted by heartbeats between words at 02:23 No comments: