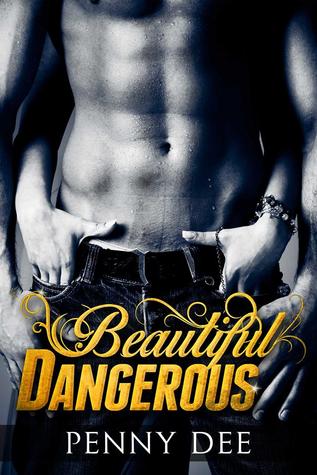 
As a result I grew up quick. I shut down my own emotions to cater to everyone else's. I guess it was my way of coping...

So, choosing to read a rock star based novel had me at a love/hate mindset. Knowing that it could go either way, from experience, I did not really know what to expect.

Saying that I am a sucker for rockstars would be an understatement. Unfortunately, having read so many books that were only enhancing the cliché of everything that we cringe at when reading that type of story, had me thoroughly surprisedat Beautiful Dangerous. So freaking surprised!!

In essence, what would you expect to happen when 2 sisters attend a concert, meet the 2 boy band brothers, and getting personally invited backstage? Not what you'd expect..

I may not have known who they were, but hot guitarist guy was getting up close and personal with every sexual urge I'd ever had...

I couldn't move if my life depended on it. It was too intoxicating to look away!

From the very first page, humour + a strong mindset was how Layla became a very lovable character. I literally laughed out loud at the most inappropriate of times (insert 'ashamed emoji' for that one time I nearly spilled hot coffee at the person in front of me while waiting for a cab.. Hey. It's not my fault I couldn't put Jax's drool worthy banter down. I'm only human after all.. ;) )

That moment where she was trying to "flirt" with him and only,literally ended up face-planting the floor? Lol I couldn't stop laughing, to the point that tears made presence hahah


Whoever said flirting was harmless was wrong. My flirting could get me killed!

Little moments like that made the story so engaging, realistic and definitely relateable.. :P

I mean, I wouldn't be able to do justice to anything involving the funny side that the author so greatly accomplished. But not only that, when you balance humour with sex appeal and an intriguing story line? Can't say anything other than PERFECT!

Jax & Layla's relationship was attraction at first sight but if anything, they worked so hard to keep their relationship working! I admired that Penny Dee captured the essence of a rock star lifestyle but at the same time, the raw, human, and almost vulnerable side that we aren't often told in books.


I was rumbling. Why? Because the way this beautiful, beautiful man was looking at me. Seriously, he couldn't be more perfect if he was Photoshopped! Damn, this guy had totally won the genetic lottery.

If that wasn't enough to make this an addictive read, she added the element of surprise which I didn't really see coming. I had a idea that it would turn out the way that it did, but the development between the 2 sisters and their two boyfriends/rockstars, was second to none really.

Layla's mindset was methodical, thoughtful and reasonable for the most part. But, add a mind melting, drool worthy man to it and you'd slowly realise you had no idea that bad can be good. In this case, Jax was everything that Layla needed.. She didn't know it. Expecting a one night stand only seemed normal for a man of his calibre. But, you'd be surprised by how very wrong she was..

This story truly was a great, addictive read that I will no doubt re-read sometime soon!

The ending just about killed me!! Talk about nail-biting, edge of your sit moments..


This whole situation was a freight train and I didn't have the power to stop it. And I didn't want to. My life was barrelling towards the unknown. And I liked it.

Saying that there was amazing humour is one thing.

Being able to somehow, balance that out with a heartbreaking back story for both Layla and Jax, that only leads to how they look at life now. THAT's pure talent!


Jax crouched down to survey the damage, bringing with him a delicious cloud of his scent. It was pure testosterone and sweat. And if I hadn't been so busy dying from embarrassment on the side of some random Denver street, I would have inhaled it like he was freshly brewed cup of coffee. "Yes. Falling down was fatal to my dignity."

I can't believe at one moment I was laughing so hard that I was practically showing the people around me with coffee (Yea I know. Don't judge haha). And just like that, at a flick of a page, I was balling my eyes out.

To be honest, sometimes when a book can elicit some sort of deep or strong emotion like crying, laughing, heartache... is a sign of a true novel. A novel that you know was written with passion and a care for how the author wanted the reader to experience the journey and emotions that they so wonderfully created.

That was then. Now? Now, I can't think of a better way to be grateful to have read a book that had everything I wasn't expecting. Heartbreak. Tears. Laughter. Shy smiles. Sexy moments. Basically, a whole bunch of emotions that makes me look like a weird mess..


"I told myself I wasn't going to do this" he said softly. "Do what?" "Fuck things up by falling for you."

I can gladly applaud the author for bringing this beautiful story into my life! That's so cheesy but honestly? It's hard to find a book that plays with every possible emotion, and Beautiful Dangerous is a simple, mere understatement of everything a book should be.

Defying the norm of what a rockstar and their lifestyle/personalities are like.

Treading the deep emotional balance of black with white.

Unmercifully taking possession of any chance you might have had a plans for the next day or two.

And basically, emotionally screwing up your mind when it comes to resisting what you thought were your true emotions.

A timeless story that I couldn't recommend any stronger than GET YOUR FUCKING HANDS ON THIS but kindly don't fall for Jax. Dibs on this #bookboyfriend lol

Thank you Penny Dee for being able to provide an ARC! I couldn't have been happier & prouder to give a 5+ rating to any book other than this one :)

xx
Posted by heartbeats between words at 05:22