I. Am. Free.
But am I?
I don't know how to be happy. My life has never been happy. I can't switch happy on. I don't know where my life goes from here. 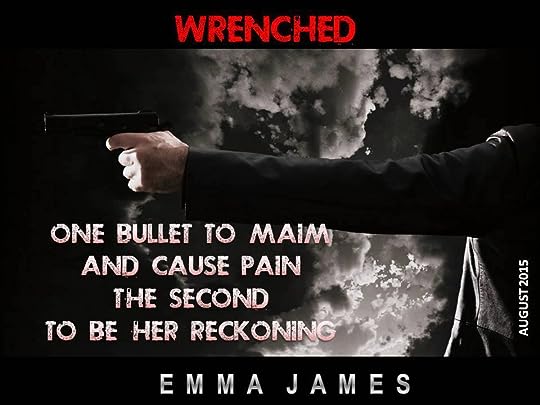 Ughhh did I ever mention how much of a love/hate relationship I have with freakin CLIFFHANGERS!? I mean really? This was an an edge of your seat type of story and to know a cliffhanger was to follow? Damn it...
Ok. short rant over, lets get started.

Addictive
Intense
Raw
Emotional
Pure
Beautiful
50 Shades of DARK
Unique
Captivating
Edgy
Sexy
When you are lucky enough to get dealt with an ARC of this beautiful dark story, it's not guaranteed that you'd be sane again after you have finished it. No. Not a chance in hell with Wrenched.
And to say that the story is anything but dark? Yeah that wont happen.

I think to a certain extent, I checked out the day she bled out in front of me. Master William chained me up while he got rid of her body, made me clean up what was left behind.
She was expendable.
She made the mistake of thinking she wasn't.
She had an expiration date.

I mean, how can your mind EVER compete with a messed up bastard that had no soul or conscience, and with what Whisper had to go through, that would be putting it mildly.
I honestly had no emotional control reading this story. None at all. And damn it if I don't prefer dark stories - it's my thing. With Wrenched, your emotions get hijacked, are never returned and you can't help but feel like you wont be the same person once you finish with the story. 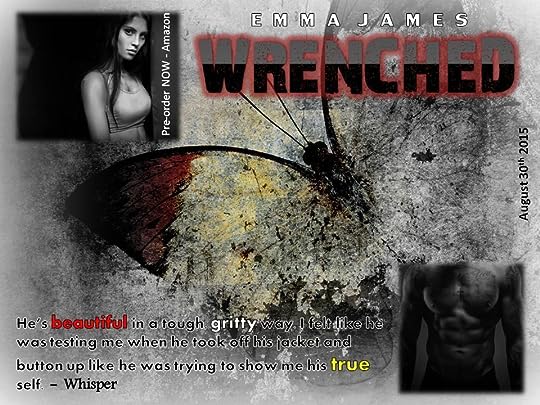 Whisper is enclosed in a life that even the devil wouldn't envy.

Fear is a powerful weapon when you know no different...

You'd think that wanting to be dead rather than stay in her current nightmare would say enough about the type of life that she had.
A life where anything but your freedom is given.
A life where someone else is in control of your next breath.
A life that nightmare would be her dream.
A life full of abuse. And what is worse, what could possible be worse than abuse, the fact that you CAN'T even think of freedom or escape or so much as consider a smile that isn't forced. All of that because Whisper HAS. NO. CHOICE.

I look at Boxer, who winks at me, then I do the only thing I know how to do, and that's take orders.

With that said, the story continues to form in an addictive read that has every element of being both intriguing and easy to read. All the characters were made into their own unique personalities..
With Whisper managing to escape the hands of the devil, surprisingly finding him dead before her, she leaves behind a life that was never a life. She escapes into freedom, but how can that be called freedom when she can't forget her past?
Emma James does a great job at having an easy flowing writing that in a way, counterbalances the dark aspects of that evolved throughout the pages. I couldn't get enough of it. 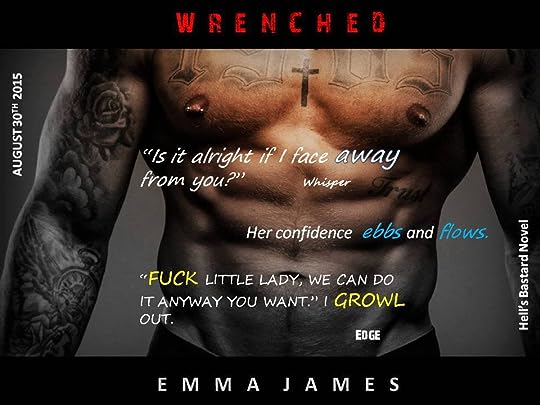 Whisper finally escapes the hands of the devil. That's how the story begins, and it never truly loses it's adrenaline rush. Not even close.
Knowing all her life that only the black should be welcomed and expected in her life, once she finds Miss Catherine, Lincoln and Boxer she FINALLY but slowly gets a glimpse of what freedom can look like. After moments of pure hesitation, because with everything, old habits die hard, Whisper, for the first time in her "life" smiles a smile that slowly started to move her barely beating heart.
Mentally she can never forget what her life evolved around. Physically AND emotionally she has scars that could almost speak for themselves.
Even after months of grasping every opportunity in realising what a normal life should have been like, Whisper can never really leave her past.. even if she thinks that everything is over now..

My life became like a piece of wood that somebody had taken a knife to and whittled into a shape, which could only be changed with more whittling. It couldn't be bent. It did what the whittler pleased.

Edge.
A Soulless Bastards enforcer.
Where to from here?

Revenge + justice are only the beginning, little does he know...
With Edge, I never really knew what to expect. Having read so many MC based books I knew that he would at least be a justice ridden biker with an MC family that would die for one another.
Edge is one of those characters that you expect to be one way, but it's anything but. 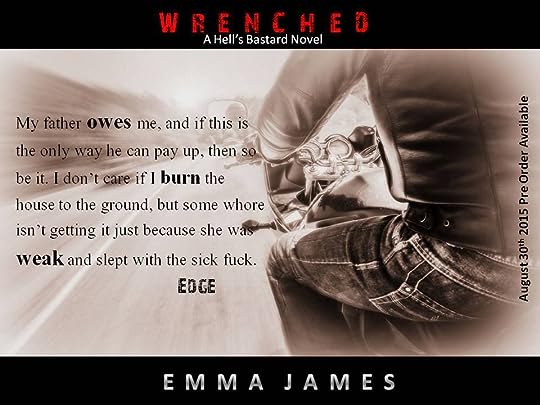 I loved that even though his perspective was RIGHT THERE at the beginning, we didn't get to hear from him again until 8 months after Whisper escaped. And boy did I miss him ;)
A sexy, tough and dirty mouthed biker that had one thing on his mind. Revenge. Revenge for the "slut" as he so puts it, that his father left his inheritance to. And who do you think that "slut" would be? I'll give you one guess..
If only he knew that Whisper's relationship (if can even call it anything but survival) with William was of a completely polar fucking opposite of what he was thinking. 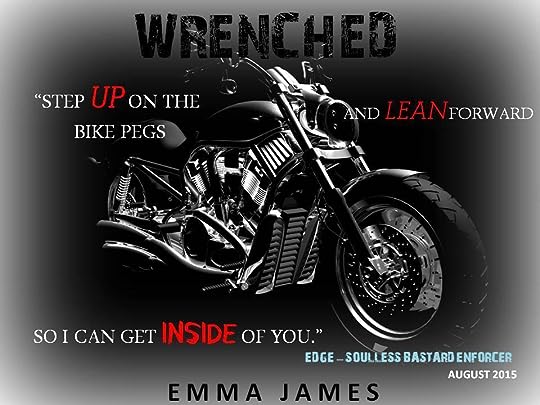 I was glad the element of the reader knowing more than the characters was there through parts of the story. It made it believable in a way that makes you wonder how much we truly know about someone else. Judging is so easily BUT lazily done so.
One of the best parts of this story was the way the scenes were created and arranged. Emma James left no trick out of the book. She knew how to capture the readers attention and she never let go. It was so cruel to be at the edge of my seat, and to think I knew what would come next? Huh.
The only part that I could perhaps say made me give it an almost 5? I expected Edge to have been introduced into Whispers life a lot sooner.
I am only saying that as a negative because when ever we were lucky enough to get his point of view, I couldn't get enough. That is exactly why I wanted MORE of Edge. Is that too greedy to ask for? ;)
HOWEVER, saying that, the pacing of the story and the characters specific perspectives were amazingly well crafted.
Knowing you are about to delve into a dark story is hard enough on it's own, but not expecting it to be accomplished so believably is another thing. 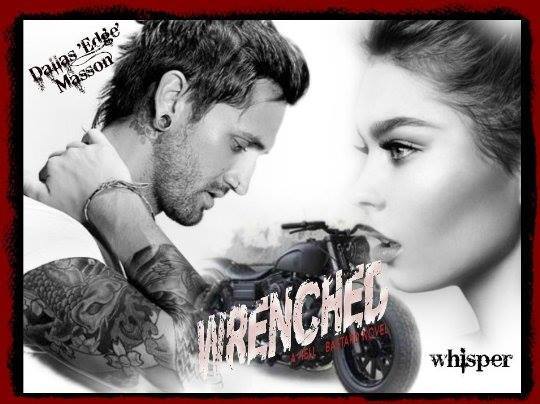 It's a rarity to stumble upon (at least in my case) a novel that has the abuse element done so well that you would cry along with the characters. Or that you would want to throw your phone after realising the cliffhanger left you with not only a broken heart, wide eyes and tears streaming down your cheeks; BUT with a jaw that hit the ground..
Yup. I looked like an idiot.
BUT it was worth every last tear, every last gasp, every last scowl AND certainly every last barely exhaled breath from not knowing what the fuck will happen next.
I LOVED this story and I cannot recommend it STRONGLY enough!!
Get your fucking ass out of your sit and get your hands on Edge and Whisper if you are willing to have your heart broken but with a smile of knowing you "felt" something when you delve into this one! 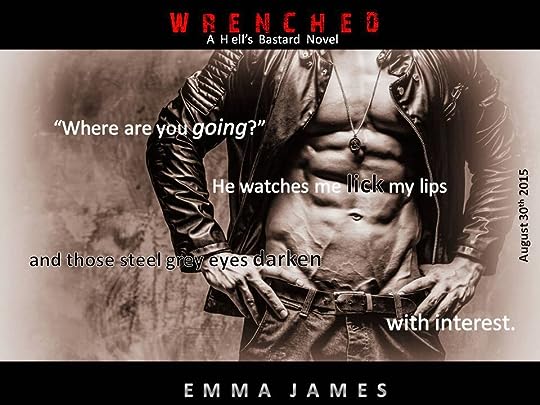 Thank you Emma James for this beautiful dark, addictive and heartbreaking creation.
Now.
Where is the next book??
I need it like I need my next breath.
..
.
Damn it! I knew I shouldn't have trusted my mind when I thought Whisper was finally hugged with freedom.
Now I'll just brew in my own frustration and only ever wonder how the story will continue..
Again. WORTH. IT!!
xx
Posted by heartbeats between words at 19:08