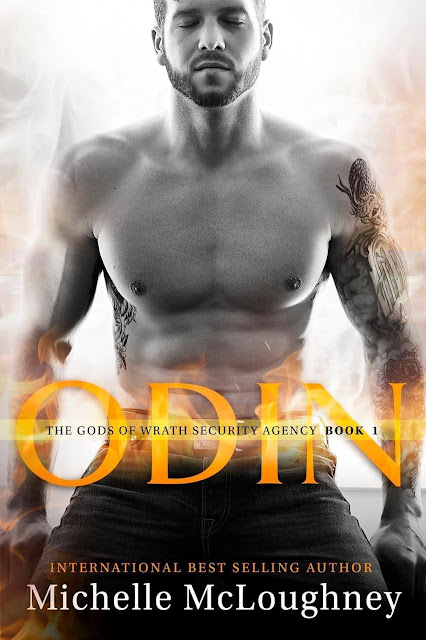 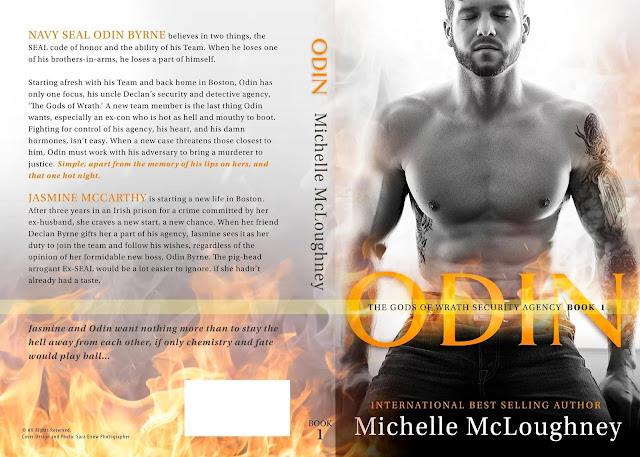 Navy SEAL Odin Byrne believes in two things, the SEAL code of honor and the ability of his Team. When he loses one of his brothers-in-arms, he loses a part of himself.
Starting afresh with his Team and back home in Boston, Odin has only one focus, his uncle Declan’s security and detective agency, ‘The Gods of Wrath.’ A new team member is the last thing Odin wants, especially an ex-con who is hot as hell and mouthy to boot. Fighting for control of his agency, his heart, and his damn hormones, isn’t easy. When a new case threatens those closest to him, Odin must work with his adversary to bring a murderer to justice. Simple, apart from the memory of his lips on hers, and that one hot night.

Jasmine McCarthy is starting a new life in Boston. After three years in an Irish prison for a crime committed by her ex-husband, she craves a new start, a new chance. When her friend Declan Byrne gifts her a part of his agency, Jasmine sees it as her duty to join the team and follow his wishes, regardless of the opinion of her formidable new boss, Odin Byrne. The pig-head arrogant Ex-SEAL would be a lot easier to ignore, if she hadn’t already had a taste.

Jasmine and Odin want nothing more than to stay the hell away from each other, if only chemistry and fate would play ball… 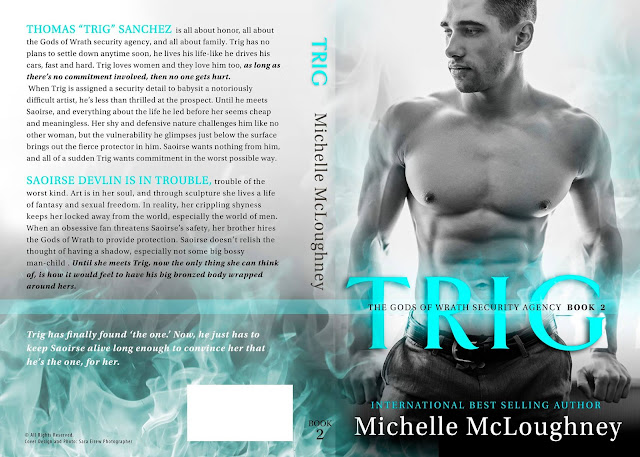 Thomas “Trig” Sanchez is all about honor, all about the Gods of Wrath security agency, and all about family. Trig has no plans to settle down anytime soon, he lives his life-like he drives his cars, fast and hard. Trig loves women and they love him too, as long as there’s no commitment involved, then no one gets hurt.
When Trig is assigned a security detail to babysit a notoriously difficult artist, he’s less than thrilled at the prospect. Until he meets Saoirse, and everything about the life he led before her seems cheap and meaningless. Her shy and defensive nature challenges him like no other woman, but the vulnerability he glimpses just below the surface brings out the fierce protector in him. Saoirse wants nothing from him, and all of a sudden Trig wants commitment in the worst possible way.
Saoirse Devlin is in trouble, trouble of the worst kind. Art is in her soul, and through sculpture she lives a life of fantasy and sexual freedom. In reality, her crippling shyness keeps her locked away from the world, especially the world of men. When an obsessive fan threatens Saoirse’s safety, her brother hires the Gods of Wrath to provide protection. Saoirse doesn’t relish the thought of having a shadow, especially not some big bossy man-child . Until she meets Trig, now the only thing she can think of, is how it would feel to have his big bronzed body wrapped around hers.
Trig has finally found ‘the one.’ Now, he just has to keep Saoirse alive long enough to convince her that he’s the one, for her.

Michelle McLoughney is the author of the Amazon bestselling Saga, The O’Malleys. She lives in County Clare, Ireland where her first series is set. Michelle began writing at a young age and won her first national poetry competition at 17. Michelle has been widely published throughout Ireland and internationally. Rory is her first novel in the O’Malley series.

Posted by heartbeats between words at 05:45