TAKE A RISK
by Scarlett Finn 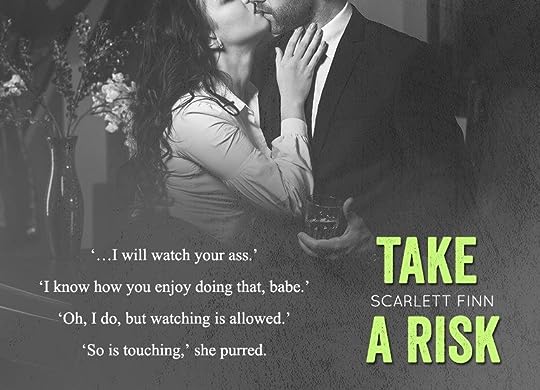 When you are thrown into a situation where your life evolves around only ever having eyes at the back of your head? Being paranoid about everything to do with locking every single access to your home? When stress for staying safe + alive overpowers any other part of your life?..

And that's ONLY the beginning..

Well, those are only mere instances of what Lyssa was going through. Being an expert in studying the mind, particularly in the sexual aspect, you'd think that she would have a fun life that involves everything and anything BUT a stalker.

I mean, she does deal with so many patients on the daily basis so I guess there's an aspect to it that makes you wonder of all the admirers she would have from talking so intimately about sex.

Being helpless wasn't something Lyssa liked and she'd fought all of her life to hold onto her confidence and maintain control of her own experience while other's tried to take it away. But she had a sense that this predator wanted to take that control from her.

With all the battles that she has been fighting to at least keep control of her emotions when it comes to staying out of harms way - especially with the stalker becoming more confident - she finally reaches out for help.

In her state to find the best help she can, she is thrust into the hands of Colt Warner. Yup. Even the name spells out trouble. Just saying it as it is. As you will see once you delve into this story.. ;) 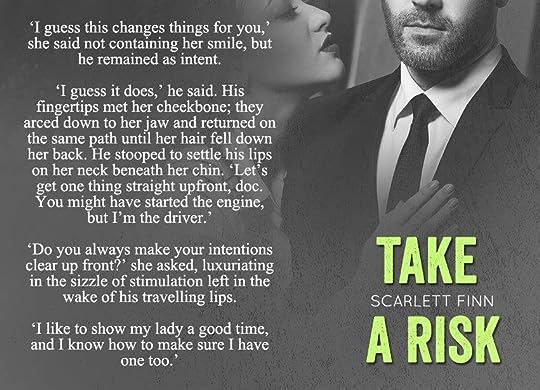 In her attempt to basically get her life together, and rid of the stalker that only seems to be riskier in how he approaches her, the last thing on her mind would be Colt. BUT. Having to discuss sex with clients almost 24/7 it isn't easy. AT ALL. To resist temptation to at least look twice at a man that would make any woman's mind go blank and panties drop. I can even say that from the way he talks and thinks (leaving the looks to the side for just a moment) I too, like Lyssa, would mentally drool over this type of creature.
As hard as it was for Lyssa to admit, he is her last saving grace. In more ways that one but more importantly, keeping the dangerous stalker away from her. No matter what the costs...

"Trust has to go both ways. I can give you your life back; it's up to you if you want to screw up your best chance at that."

If I thought the beginning of the story was intense, it doesn't even compare to everything that happens afterwards - particularly after she meets Mr Colt Warner.

If Colt gets that girl you know he'll protect her body with his life. He's a protective sonofabitch.

When all your choices are taken away from you - unwillingly - you can't expect to be able to breathe properly let alone think that your life will be all bright colours and at least a glimpse of a rainbow. No. But, you always have that little bit of faith and trust and the last remnants of control. Control that you give to someone that can, WILL BE, the right turn to having your life back to it's normal state. Well, as normal as it can be considering all the events that happen within Lyssa's attempt to get rid of "him", the stalker. 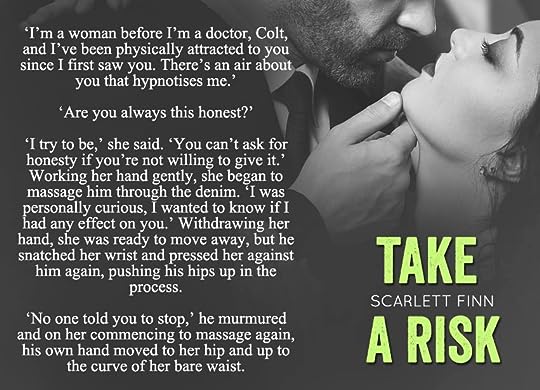 This beautiful dark but addictive story takes every possible turn that will make you grab onto any free minute/hour of your day and never let go till you're done. I'm not kidding!!
Reading this story was like going through an emotional roller-coaster than NEVER backs down. It doesn't even follow the speed limit, just keeps on going at it's own frantic pace. Not giving a shit about our emotions.. a.k.a I was a mess leaving this story, an utter mess but with a smile.. :D

As dark as it was, both mentally and physically, it also had so much humour, passion, intellect, sexiness, blushing moments, question mark moments and everything else in between.

"What are you so interested, Mr. Warner?"
"I'm an ass man, Doctor Cutler," he said. "And you have one worth looking at."
"Do you have no shame?", she asks.
"Turn around and let me see again."
And the thrill that zipped through her made her do as he told her, "Looked your fill?"
"If we weren't in public I might be tempted to touch."


Take A Risk was written with the reader being at the forefront of the audience. It BALANCED OUT every aspect that makes a dark romance addictive. And I seriously mean every part.

I love books for different reasons. In the same way, I give the highest mark or reviews to books that are often completely different from one another. That's the best part about it. I can love one book for one reason, and another for something else. It opens up my eyes to aspects that I never knew I'd be falling for and parts about my thinking that I never really knew I would be interested in. And TAKE A RISK is one such example.

Scarlett Finn is honestly a talent that I would look to read her books for as long as she so willingly can write. In this book alone, she was able to master a way of making the reader understand the characters personality, mindset, decisions, bad choices and even aspects that you wouldn't expect the character to make?

The writing style is simple yet complex.

Dark in all things to do with a stalker, multiple homicides & killings, blood and intense thoughts BUT it still had the strong element of humour - throughout.

Action, ALOT of action and yet so MUCH romance.

Frightening at times and even scary BUT if anything the love element was a very strong part that played well with trust..

Betrayal but trust as well.

Passion but arguments all over the place.
etc etc 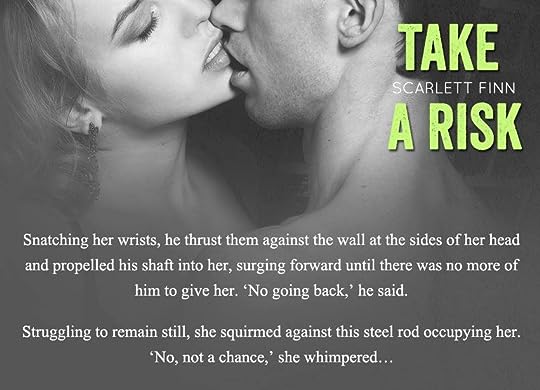 LOVE was such a prominent part of this story. But, it wasn't the main aspect. Passion was there, at full force, and so was trust, control and freedom.

It was easy to fall for this story and every part of the characters that made it one of my favourite books now. Yes. I can happily say that I will definitely be recommending this book to every one that I stumble across. No questions. 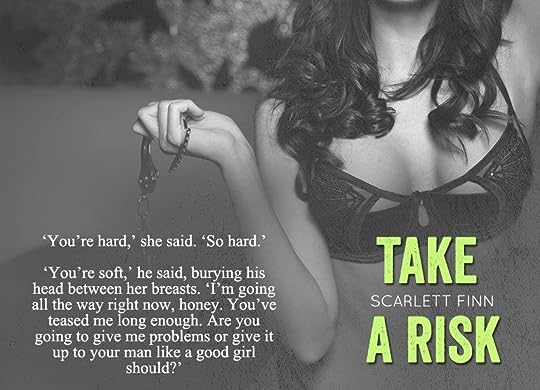 Overall, I can't find a fault. Hmmm I was trying to think of one when preparing to write this review but I really couldn't. And I don't usually say this because it's hard to find a book that I fall head over heels for but with TAKE A RISK? No faults. Well, maybe I would have liked Lyssa to have been more careful with what she did when Colt wasn't there to protect her but the title wouldn't have certain words in it without every aspects of a risk being thrown in there.

Every part of the story that you'd think you would say "She's so stupid. Why would she leave the door unlocked when there's a stalker on the lose?", would instantly be met with a counter argument that makes you nod in agreement. Well, I did, so whether you will too is another story. Read the book and let me know?

We can discuss all the fine things that this story bought... Or you know, every detailed inch of Colt fucking Warner. Where do I get one and can I please have my very own Mr Warner? Please and thank you!

Enjoy the story and make sure you have a couple of hours free or at least with no disturbances. Trust me, YOU DO NOT WANT TO BE INTERRUPTED. That's always the worst part about reading an additively good guilty pleasure story!

"You're a lucky girl, you know that," he said. "I'm going to make sure you spend the rest of your life craving the ecstasy that only I can give you. Your pleasure will be delivered by me, in every way imaginable. Sex will be part of your everyday diet and I guarantee you that I'll deliver each and every time."